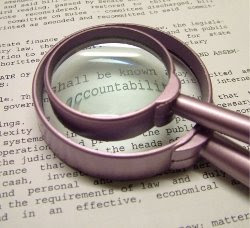 In an article on Friday July 10th, 2009 by Terry Fieden of CNN, we learn that that a domestic surveillance program began soon after 9/11. Why does this matter? Well, because this was happening without public knowledge or consent and our privacy rights should not be trampled, especially not in secret by the governments in place to protect us.

The article goes on to note “that several members of Congress â€” including then-House Intelligence Committee Chairman Nancy Pelosi â€” were briefed on the program on October 25, 2001, and a total of 17 times before the program became public in 2005.”

And what will we do with this information? Now that it is revealed that our rights have been neglected and abused will we take a stand? Will we protect the rights we have, the rights Iranians fight so hard to acquire?

How can we idly stand by a government that cannot be trusted? Why are citizens prosecuted many years after committing a crime whereas governments are forgiven? This is not ok.

For more free, exclusive and tactical resources from Communications Central, use our Newsletter Sign-Up form.

Learn more about our raison d’Ãªtre for this blog.

Until next time, smile and be your best self!

JTC In Your Inbox!

Enter your email to get exclusive info on top posts, events, launches & more.